HAS THE VIRUS ‘SARS-CoV-2’ AS WELL AS THE ENTIRE FIELD OF VIROLOGY BEEN REFUTED? 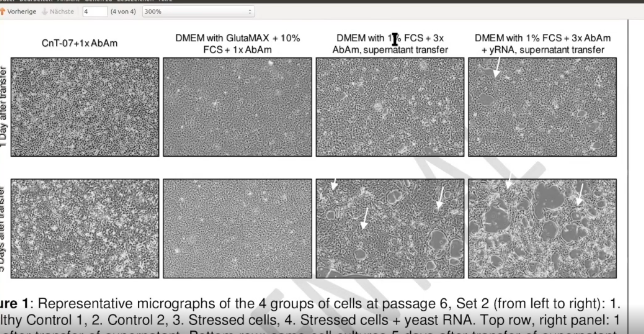 Bio
Stefan Lanka, PhD is a German biologist and former virologist. Since the early 1990s, he has been at the forefront speaking out about the pseudoscientific methods used to prove the existence of so-called viruses and challenging the medical theory stating that viruses are the cause of infectious diseases.

We are truly living in extraordinary times. Kids are now being vaccinated for a virus that has never been proven to exist. Yet we do know that these alleged ‘vaccines’ are in fact Experimental Gene Therapy Technology Injections that kids are been jabbed with and can cause serious health problems and even death.

We adults must say stop, we must come to our senses, we must realise that kids are counting on adults scrutiny, critical thinking and commonsense. Where is the informed consent, what happened to the Nuremberg Code, what happened to all the doctors that took the Hippocratic Oath which is an oath of ethics and first do no harm to the patient?

Below you see a video of Biologist / Virologist Dr Stefan Lanka and Dean Braus that refutes not only the virus SARS-CoV-2 but the entire field of Virology.

The interview is in German with an English voice-over. It is quite a direct translation from German and therefore syntax wise not always correct. I have transcribed the English voice-over which you can find underneath the video. I made a few small changes so it made better sense for reading purposes.

For the first time in roughly 70 years, Dr. Stefan Lanka does what no virologist has done; he conducts a control experiment which shows that what virologists call “viruses” are nothing more than natural byproducts of cellular breakdown. This indicates that the method virologists use to isolate a “virus” (the poisoning and starvation of cells and the addition of molecular material) is responsible for producing what they call viruses. The control experiment indicates that, even when the sample consists of healthy cells, one can find in it any virus they wish, including SARS-CoV-2, the alleged virus responsible for COVID-19.

Braus: let’s get to the highlight CPE: the three letters Cytopathic Effect the control experiment.

Braus: you were gonna show us a little bit about that.

Lanka: indeed, I now have the first results from the control experiment they are here now. They clearly show the effect that all virologists take as proof. That the tissue or the cell material turns into a ‘virus’. We can perform the same exact results with the methods only without allegedly infected material added. We have here the pictures that we can zoom in on. Can you do that (Braus) or can I do (video screen) that (Lanka)?

Braus: I think you should be able to do it, I give you access to it here we go.

Lanka: yes, those are the control experiments. These are the freshly isolated tissues that are separated in this form referred to as a cell. Here (first-row second picture) we have conveyed them into the medium that virologists use. We have added 10 per cent fetal bovine serum. We took low amounts of antibiotics and so they (cells) can get used to it and here actually it’s when the experiment starts.

We reduce, like all the virologists do, nutrient solution from ten per cent which is normal, drastically down to one per cent. Then add huge amounts (three times) of antibiotics (first-row picture three) and we can already see that the cells and the tissue don’t like that. Already one day after the transfer and especially after five days we can see massive cell decay. Exactly and specific (second-row third picture) in the same manner like virologists are interpreting it. That is, this is the cell toxin, the cell-killing, the cytopathic effect abbreviated as the CPE.

We can see this even more clearly when I (Lanka) added another source of RNA (first-row picture four): this one comes from yeast, not standardised yeast but messenger substance. The RNA was taken from yeast to verify to see how the tissues of the cells deal with it (row two fourth picture). When I add infected material to the cells, because that’s full of nucleic acid, the decay and the depth of the cells is even more dramatic.

The day before yesterday I have already received the results from the RNA that we isolated from the controls that have not been treated (row one picture one). From the differently treated virus probes we have isolated the RNA. This is now in the sequencing and the quality of the RNA is extraordinary for our purpose. I received the results yesterday, thereby virology is disproved. In the first step because we clearly demonstrate that the central effect, the dying of cells in the test tube, we can create in the same manner without infected material!

Virologists should have made such a control experiment. From 1954, until today, it is not documented that they did. So this equates with this cytopathic effect CPE and this is for the virologists the proof of a virus. And then they’re calling their dying cell tissues an isolate which then they offer on the market for 2000 euros. And then they say and in here (test tube) this is the virus and from that, we can create a vaccine now. We can take the whole and then we call it a live vaccine.

Or they take out individual proteins and call it an inactivated vaccine. Because there’s only a component of the virus present and that makes it not infectious and this is claimed as an inactivated vaccine. And this is what we have achieved, this is a third of the refutation. These tissues now are in electron microscopy and I can already say they will detect the same exact particles in the non-infectious tissues that virologists always claim to demonstrate as virus particles. This is happening now at the pivotal point in virology, with the nucleic acid being sequenced.

And then we do just as the virologists do; we construct with their own programs that are already running on our computers. We construct the same exact genome as SARS-CoV-2, HIV, Measles or Ebola from exact material that was never infected that has never been in contact with material from a patient. These are the control experiments and part one is successfully completed and now we’re waiting for the Electron Microscopy and then later for the genetics. But here (see pictures two, three four in row one and two) the central argument of virology has been refuted.

This cell effect, this cytopathic effect that tissue cells die, that this is a virus we have now thoroughly disproved. This is the first success and here I present this data for the first time publicly.

Braus: this is a small sensation or a huge sensation but you already knew it beforehand?

Lanka: yeah, I knew it and as a biologist I know it comes like this. We already had it with the measles virus. I did it just like that back then. The RNA was not sequenced to disprove that we didn’t need it back then.

Note: if YouTube delete the video you can find the same video here on Odysee.