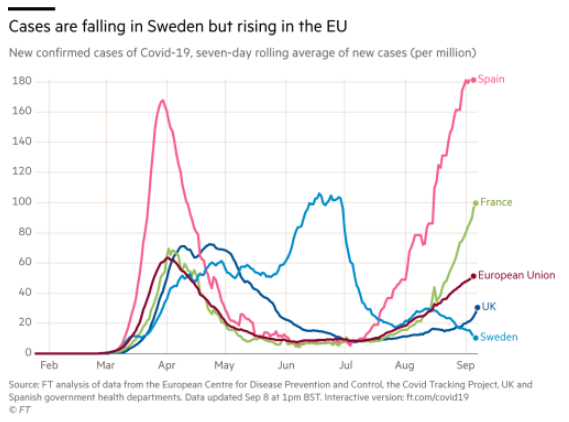 History will record COVID-induced lockdowns as the product of pseudoscientific ideology, manifestations of unprecedented mass hysteria and drummed-up fear.

When Sweden strayed from the herd of nations hellbent on lockdown, it suffered intense vilification. The modellers who agitated for lockdown as a profoundly necessary step opined that veering from the mainstream playbook would see Sweden suffer some 100,000 excess deaths, double its normal annual death toll. Daily articles, notably in The Guardian, berated the country or the murder that would surely ensue if it didn’t rejoin the herd.

A lot was riding on this. In taking up the lockdown baton from China, the world was conducting a dangerous experiment. That experiment involved tearing up the public health policy guidelines for respiratory virus epidemics of the World Health Organisation (WHO), the US’s Centres for Disease Control and Prevention (CDC) and many others.

These guidelines were the results of a century of evidence and deliberation that was summarily ignored when the virus arrived. Detailed statements of principle governed the evidential processes required to revise them. These too were ignored.

The basis for all of this was the assurance of the WHO’s Bruce Aylward that China’s lockdown had contained its epidemic. This in turn was based on speculation that everyone was susceptible to Covid-19 and that, without lockdown, the exponential growth of disease and death was inevitable. This was a curious assumption. Since February 2020, it had been known that the SARS-CoV-2 virus that causes Covid-19 in susceptible individuals, was very closely related to other coronaviruses, some widely circulating. The likelihood that immune systems would find it completely novel was low.

But Sweden did not lock down, becoming one of the most alluring control experiments the world has ever seen. And it did not suffer 100,000 excess deaths. Not even close. Instead, this is what happened:

Whether you are a lockdown fan drawing trend lines that suggest Sweden had 8000 excess deaths or a sceptic concluding there were none because of a build-up of very susceptible people from an abnormally low death rate in 2019, this reality dealt a devastating blow to the lockdown theory and the models used to justify lockdown.

Covid-19, it turned out, was not only far less deadly than modellers had predicted, but they couldn’t credit this to the lockdowns they’d promoted. Sweden clearly showed that failure to lockdown did not constitute genocide.

Meanwhile, lockdown harms were entirely predictable, enormous and vivid. Realising this, some modellers then tried to argue that business and school closures, stay-at-home orders and quarantines cause no more destruction than the epidemic would have caused without them, a proposition that flies in the face of the evidence of lockdown effects worldwide.

Some applied the “secret sauce of pairwise comparisons”, cherry-picking Scandinavian neighbours that had fewer excess deaths. This ignored the points that those countries were essentially the same as Sweden outside of Stockholm, the location of most of Sweden’s deaths, and that similar pairings – Peru and Brazil, for instance – yielded opposite conclusions.

Some focused on Sweden’s official COVID-19 deaths, despite the fact that it counted all nursing home deaths within 30 days of a positive SARS-CoV-2 test as COVID-19 deaths. It did so regardless of the actual cause of death, contributing to the over-count revealed by their lower excess deaths. Some argued, with no sense of shame at the implicit stereotyping, that Sweden was a culturally locked-down place to start with, that Swedes practised natural social distancing and conformed to advise.

These lines of attack were quite weak, but at least above board, as it goes. More sinisterly, a highly active Facebook group has been lobbying politicians and officials to invoke various strictures against Sweden as punishment for its independent spirit. However, Sweden’s likely swifter path to herd immunity should make it less prone to being a source of infections and variants. Others falsely claimed that Sweden had in fact locked down, or, less relevantly, was about to do so, implying that not locking down was a mistake.

What all of this points to is how little the COVID-19 policy reaction has been about “the science”, and how much it has to do with ideologically motivated reasoning. The lie that lockdowns worked spread as a social contagion, persisting among petrified citizens and ideological opinion-makers who continued to use overblown models as their alternative “what if” scenarios. Many concluded, quite erroneously, that lockdowns had saved millions of lives. Sweden stands as an emphatic refutation of this claim.

Pandemics Data & Analytics (Panda) has long argued that lockdowns are morally unsound and fundamentally wrong, and furthermore that no decision to lockdown can be viewed as rational in the absence of careful cost-benefit analysis. Yet not a single government perpetrating lockdowns has ever published any such thing, for the principal reason that any reasonable attempt to do so would expose them as obvious non-starters.

History will thus record lockdowns as the product of pseudoscientific ideology, manifestations of unprecedented mass hysteria and drummed-up fear, and reminders that we must always defend vital freedoms against panicking and power-drunk politicians.

Nick Hudson is an actuary and co-founder of Pandemics – Data and Analytics. The views expressed in the above article are not those of The Citizen and are meant to promote a spirit of open debate.